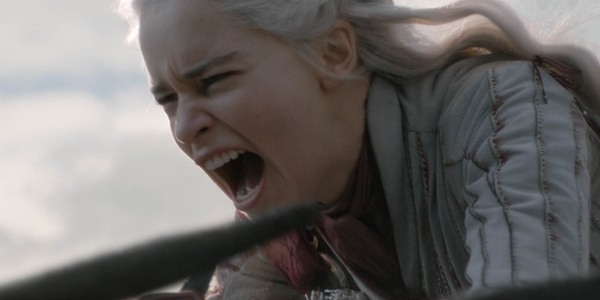 Hey all! What a crazy episode this week, we see some major character deaths. First Varys is executed for betraying Dany. He has spread the word of Jon’s lineage. He does this believing that Jon is the better chose for the throne stating the famous coin flip the Targaryens inherit. We also have the long awaited Cleganebowl! The Hound (Sandor) makes his way to his brother The Mountain (Gregor) and they throw down. The fight is a long one with them both giving it their all until finally The Hound tackles him through a wall and into fire. A fitting end for the man so afraid of flames. A huge double kill when Jaime finds Cersei and they try to escape through the hidden tunnels. The exits are blocked and the Red Keep is collapsing around them. Knowing death is imminent, they choose to leave this world in each other’s arms. Euron dies too, but does anyone care about him? Finally we have the saddest death, Daenerys’ humanity. We see her finally break when given the chance to take a subdued victory. Staring at the Red Keep and hearing the bell of surrender, Dany can only think of all that she has lost. She wants revenge and to spread fear. The citizens of Kings Landing pay dearly for this as she begins engulfing the streets in dragon fire. Ripping through walls and leaving all in ash, Dany has embarrassed the madness of her father. “Burn them all” were his final words, she has obayed. Join us as we discuss this emotional episode.