I Am Not Okay With This is a new Netflix series that premiered February 26th and follows a teenager named Sydney as she navigates high school drama, sexuality, mourning her father’s suicide, and her emerging telekinesis. This is based off a graphic novel of the same name by Chuck Forsman.

Sydney is, in her own words, a “boring 17 year old white girl” who is trying to get through high school while still processing her father’s suicide in their basement. She is slowly realizing that she is in love with her best friend Dina and this is even more complicated with her friend drifting away after dating the standard high school jock. Her neighbor and eventual boyfriend seems to relate to her the most. Syd has a difficult time understanding the lines between romantic feelings and genuine friendship as they tend to blur together. All this, with a big twist…telekinesis. As Syd’s anger rises she unleashes bouts of telekinesis bursts that can “force push” her environment away or even cause nose bleeds.

Much of the story is narrated through Sydney’s diary entries. Early in the series this can be excessively used as exposition. Leading to a couple of the first episodes dedicated to building the world. As the series gets underway, there are moments when the story feels a bit slow. Primarily during the relationship moments around Syd. They can be edited down but they would need to be very careful because the interactions between Syd and her friends are the highlight of the series. These interactions feed into the three plots running concurrently; mourning her father, discovering her sexuality, and controlling here telekinesis.

Sydney Novak is played by Sophia Lillis from IT: Chapters 1 and 2. She thrives in this role! Her ability to show joy, heartbreak, and anger in a 30 second span makes you step back in awe. She is even better when playing off her co-stars, especially Stanely Barber played by Wyatt Oleff. Wyatt was also in IT and played Stanely there too but this is a very different character. Stanely Barber is a nerdy loner but apparently by choice. He is often seen as observing his peers and thinking of high school from a very adult perspective. He is only humbled by Sydney’s presence as he tries to impress here. After they become closer, he lowers his guard and the two work together so well. The third most screen time goes to Sofia Bryant playing Dina. Dina is the best friend being pulled away by the ‘cool kids’, but she is also so much more than that. She begins to grow as a character at the tail end of the season but there is more to come from her. 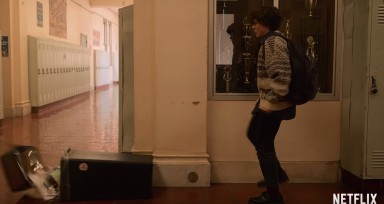 The series is from the producers of Stranger Things so I went in expecting an 80’s bonanza. Well instead of the neon malls or DnD basements of Stranger Things we were treated to a much more sublte John Hughs’ little town. The John Hughs/Wes Anderson influences can not be understated. There is an episode that mirrors ‘The Breakfast Club’ with a horror finish. The show skirts the line between coming of age comedy/drama and a slow growing horror film. The score was distracting at times. That is the cardinal sin for scores, they are to influence emotion without you even noticing it. I found myself contemplating the composer’s choice in music often. They used a heavy dose of experimental rock and decided on a slower melody in some fast paced moments. The telekinesis effects were solid but not overdone as Syd is just discovering her abilities. In the coming seasons, we will probably see more put into the special effects budget.

I am conflicted on this show. I either love it or think it’s just okay. In the end I would say that the characters are full and amazing but need a better direction going forward. Now that the first season has set up these problems, I’m looking forward to see how Sydney is going to overcome them. 65/100